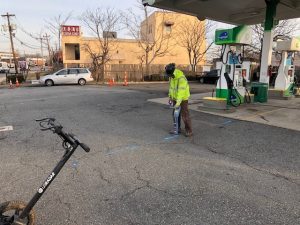 Electromagnetic Locators Used to locate buried pipes, cables, and sewers, this type of device detects the alternating magnetic fields that surround a conducting metallic line. As a result, it can’t locate nonmetallic lines, such as plastic pipe, unless it is installed with tracer wires. This technology works in all soil conditions, even under water.

There are several major manufacturers of electromagnetic locators. The company’s line of products features a self-contained transmitter that generates an AC signal that creates an electromagnetic field around a buried conductor. These signals are picked up by a handheld receiver.

By varying the transmitter frequencies, active signals allow a locator to positively identify and trace a single line in a congested area, such as subsurface utilities in a city.

Foresight Locating, LLC., is proud to announce its’ acquisition of the Quantum Imager™, the worlds’ first ground penetrating radar system to use triple frequency radar technology for locating and imaging objects at greater depths and with higher resolution than competitive single or dual- frequency systems.

The four wheeled, walk- behind Quantum Imager™ incorporates a Panasonic Toughpad tablet computer that enables the operator to run a suite of Windows- based applications, including GPS, 3D imaging, Google Earth integration and report generation.

The triple frequency Quantum Imager™ is capable of significantly greater depths with higher resolution than any other locating technology. Stepped Ultra Wideband Pulses combine the advantages of pulse radar and stepped frequency radar to offer unsurpassed resolution and depth.

The Quantum Imager™ offers drastically more depth as well as higher resolution than any other imaging technology on the market.

Pipe inspection cameras allow you to see first-hand what your plumbing problem may be. Cameras can show breaks, clogs, tree roots, or any other problems in full detail.

Auto- Calibrate: Using a unique averaging removal algorithm, the antenna and software recognize the prevailing soil conditions and calibrate the images for optimum data gathering.
Time Varying Gain: The only software/ hardware integration that recognizes the duration of the pulse and applies gain accordingly. The deeper the target, the higher the gain… automatically!

Algorithm: Similar to focusing a camera, the operator can increase or decrease gain on a specific depth range. Target identification and layer tracing are much easier for those hard-to-locate targets.
Backtrack Feature: Pinpoint the precise location of the target with the position indicator. When a feature is spotted in the data, simply move backward until the indicator is centered on the target.
Position Readout: Simply tap the screen on an image of interest and the distance from the beginning of your pass and the depth will be displayed (x and z coordinates). This feature works both in real time and on stores data being replayed.
Snapshot: Store full screen images for reports, sharing with others, and printing. One tap of the tough screen “Snapshot” function and the image is saved.
Record: Full scans are stored for later analysis and review.
Measure Tool: User to measure the distance between two targets.
Tagging/ Annotation: Features can be identified and highlighted for report building purposes, then positions can be exported to a spreadsheet with either relative positions or latitudes and longitudes
Advanced Depth Calibration: The depth scale can be calibrated based on targets at known depths.

Foresight Locating, LLC offers state-of-the-art Ground Penetrating Radar services in Monmouth County and Freehold NJ. Ground Penetrating Radar (GPR) is the latest method for non-destructive and non-invasive subsurface investigation. GPR is the tool of choice for those who need to locate and identify the presence of buried utility infrastructure, both metallic and non-metallic. GPR is an effective and safe way to locate embedded and/or buried obstructions prior to drilling, cutting, coring, trenching or digging. GPR is a very cost-effective method, offering an expeditious means of gathering subsurface data from a range of materials including concrete, soil, and asphalt.